My P27 amplifier has a nice sound but its distortion tone is pretty useless for various flavours of heavy rock/metal. I’ve made a few overdrive distortion circuits on my bread board and this is the first one I liked enough to decide to commit to a pedal. The circuit is modelled on the (in?)famous Ibanez Tube Screamer, but with modifications to suit my taste. I also ditched their JFET effects bypass scheme in favour of a triple pole double throw foot switch which also illuminates an LED to tell me when the circuit is engaged (it’s common for pedal manufacturers to use these BOM-heavy schemes because parts are cheap, but labour to wire up 3PDT switches is not). It runs from a 9V battery, but can also be run from a plug-pack. When the plug-pack is inserted, the battery is bypassed. To stop the quiescent current of the circuit draining the battery when not in use, a switching jack socket is used on the input. When the plug is absent, power is disconnected.

Step 1. Throw out the bread board version and re-build the circuit on prototyping board and verify that it actually works: 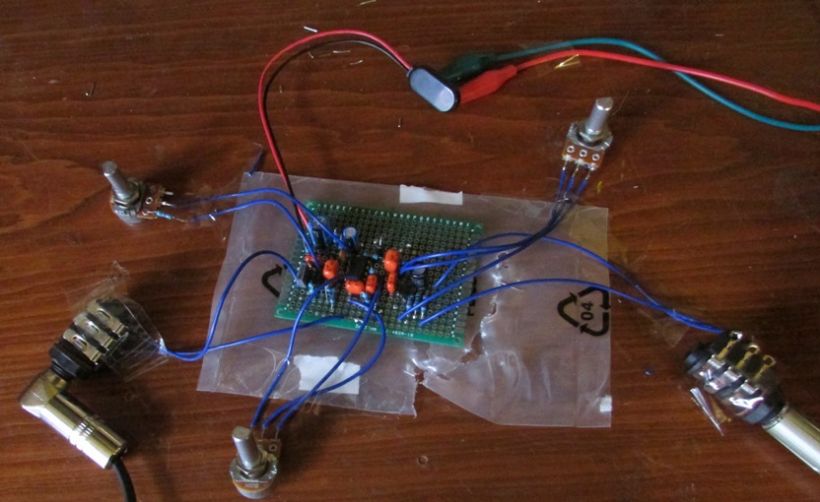 It's useful to tape the jacks down so the weight of the cables doesn't drag the board off the bench.

Step2. Buy a cheap die-cast aluminium case, drill some holes in it and paint it: 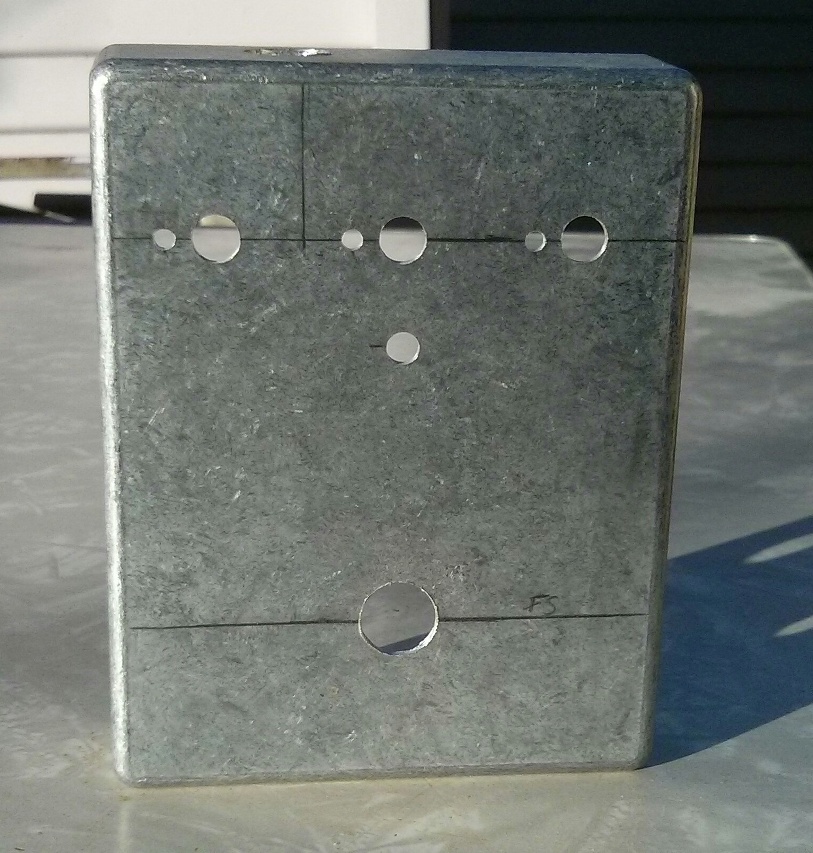 This was the most expensive part of the whole build at around ten dollars.

Step 3. Assemble the components in the box: 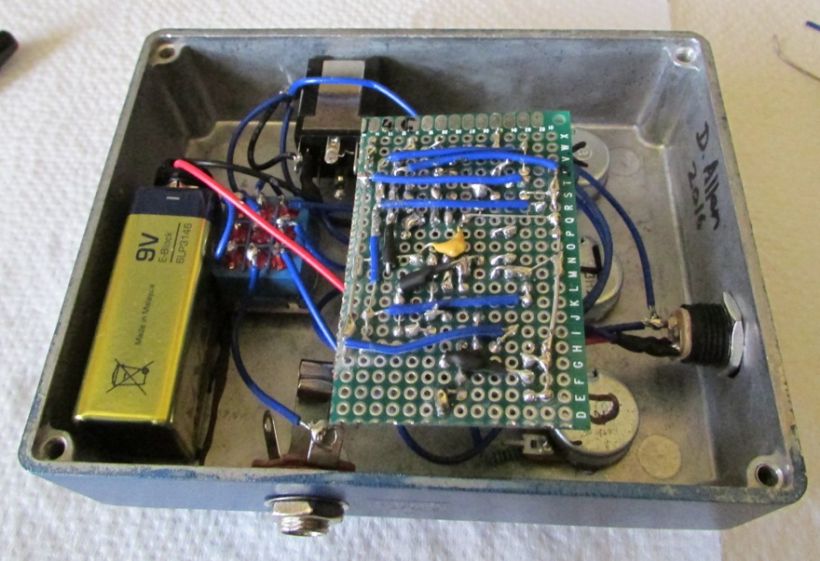 Wiring the pots to the board was a bit fiddly. The rear of the board was then insulated from the case by hot-gluing a piece of cardboard to it. 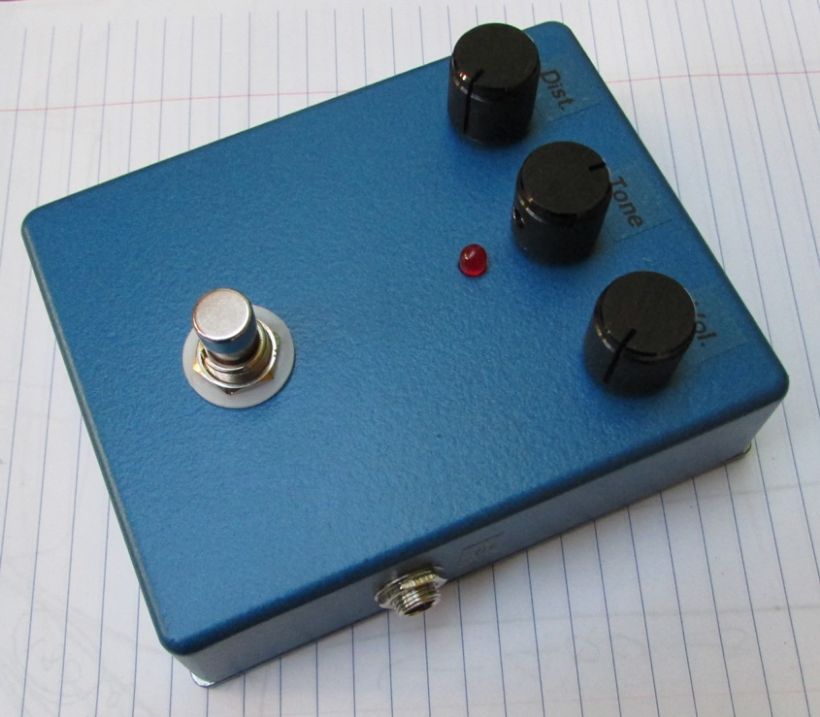 I won't use stick-on labels for a pedal again as they don't stick down well to the orange-peel texture of several coats of spray paint. 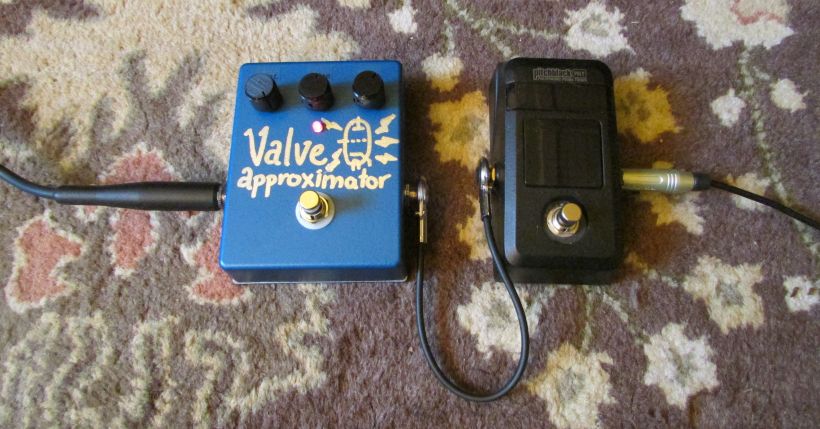 The top needed a bit of jazzing up. I quite like the lo-fi effect of simply drawing on it with a paint marker.

And there it is, a proper effects pedal for around $30. The most expensive components were the case and the foot switch, which made up the bulk of the cost. The rest of it was jelly-bean parts I already had lying around. It also uses an NE5532 opamp instead of the noisy 4558.

As I said above, it’s basically a knock-off of the Tube Screamer, but with a modified tone circuit and a slightly different feed-back path. I use it to play things like Judas Priest, Black Sabbath and The Offspring. If you turn the distortion right down, you can get a pretty cool ‘dirty blues’ kind of sound out of it as well. Well worth the effort :)