CSSconf AU is a not-for-profit conference run by volunteers in the Melbourne web-dev community. Like all conferences, CSSconf aims to bring people together to share their knowledge, as well as build ties within the community. There are a number of similar conferences run around the world, including the United States, Argentina, and Asia.

I was fortunate enough to be able to attend thanks the conference’s Opportunity Program, where a limited number to free tickets were provided to people from under-represented groups in the technology industry, as well as for those (like me) who would not otherwise have been able to attend on their own dime. I’d like take this opportunity to thank both the organisers, the sponsors, and the individuals who gave so generously to the program. Thank you all, it really means a lot. I hope one day soon I’ll be able to return the favour :)

The conference was held in the former Metropolitan Meat Market building in North Melbourne. This beautiful example of classical Victorian architecture, as with many other commercial and public buildings erected during the gold rush period of the nineteenth century, stands as a monument to the extraordinary prosperity of the city during that time.

Of course the city continues to prosper today, and the conference itself demonstrates that fact admirably. Hundreds of people from across the city were present, coming from technology companies that cluster in former inner-city industral suburbs such as Collingwood and Richmond. Where once we manufactured boots, fine fabrics and woolens, we now build beautiful virtual worlds.

The conference boasted nine speakers from Australia and abroad. Each speaker focussed on a particular set of challenges; the topics of the talks ranged from dealing with the limitations of CSS itself, to understanding our users. It was great to hear these ideas and perspectives. I’ve spent such a long time in my own bubble here in front of my PC, that seeing these presentations was like a breath of fresh air. 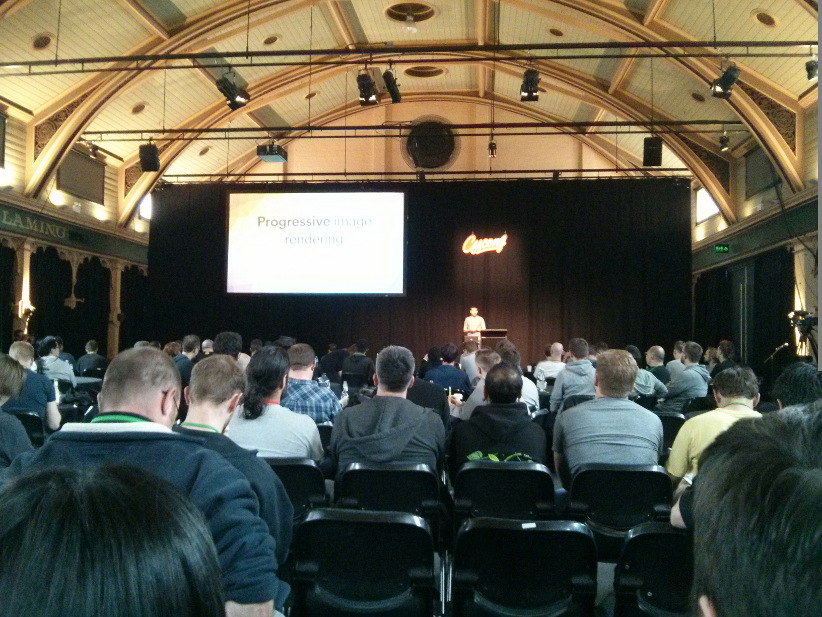 José M. Pérez presents his talk on approaches to progressive image rendering. As usual, my crappy phone camera has ruined the shot ;)

During the breaks and the after-party, I spoke with a number of interesting people in the industry. We drank beer, shared anecdotes and had a laugh. I also received a great deal of very useful advice. Thanks go to you all.

All in all, the conference was well organised and ran smoothly. I learned a lot in a short period of time and I’m looking forward to putting that new knowledge to use. I also met some great people and had a lot of fun! Thanks again to the organisers, the sponsors, and above all the community for being so welcoming and friendly. I hope to see you all again next year.